Wordle is a viral word game recently acquired by the New York Times. The game's goal is to guess a 5-letter word in less than six steps. At the end of every attempt, the player gets a color clue: the letter will be highlighted in green if it's in the right location, yellow if it's in the word but in a different place, or gray if the letter is not at the word at all.

There are many strategies to play the game (probably as many as 5-letter words are in the dictionary, or even more!), and there are even studies about which one is the best starting word (spoiler alert: according to math and statistics, the best three words are SLICE, TRIED, and CRANE.)

This article explains the way I play. At least, a deep dive into how I play the first three attempts which ends up being all I need to get the word most of the time (usually getting the solution in the third or fourth try).

Vowels are an essential part of the language. There are only five in the alphabet (six if we loosely count the letter Y), and most five-letter words typically include two vowels.

Finding which vowels are in the word will considerably reduce the number of options. So, I like to start with a word that has four vowels in it: AUDIO. I know other words also have four vowels, but I find different reasons not to go with them:

Why AUDIO and not ADIEU, then? E is the most common letter in English. Therefore, the chance of E being in the word would be higher and provide less information than having the O. This may seem counterintuitive considering my reasoning to use AUDIO instead of OUIJA, but I never said my method made any sense.

Word 2: Crisscross and the Letter E

Unless we guessed the word right in the first attempt out of pure luck (accept it), we would have to go through the second attempt. And this one will be more informed, as we will have some hints (even if it's in the form of "none of the letters were in the word").

This step will be the first one in which we can apply anything close to a strategy in the game. And I follow a weird one. One that doesn't have a base on any hard proof. It's more of a gut feeling or just plain superstition: crisscrossing the vowels (if any were in the word) and spicing it up with the letter E and some other common letters like T, N, S, or R.

But it all will depend on the result of the first attempt.

Congratulations! If the first word contains three vowels or two vowels and the letter D, the job is halfway done. It doesn't matter if they were in yellow or green; I will rumble them a little bit, add some common consonants, and go for it.

If I feel adventurous, I may even ignore two of the vowels and try a word with four "common" consonants and only one existing vowel. For example:

Notice how if I take this approach, I will always use words with four different consonants. Although, at this point, I don't care about repetition (e.g., I won't try things like CATCH, BULLY, POLLS, etc.), I want to cover as many consonants as possible. Therefore, in this attempt, I will ignore both E and Y.

If the first word contains two vowels from AUDIO, I will not attempt a word with E and go with the vowels I already know are in the word. And, as mentioned above, I tend to crisscross them. Why? No reason whatsoever. Or not any that I have any proof of (but I will run some tests later). It's just a way of doing it.

So, for example, if the letter A and the letter O were in the word but not in the correct position, I would not play a word with A before O. Instead, I would play an O-before-A word like CORAL. Same for U and I (INPUT) or any other vowel combination.

Path 3: One Vowel from the First Word

If only one vowel was in the word (with or without the letter D), player two enters the game: the letter E. Of course, it could also be a Y, the same vowel twice, or nothing at all. But adding the E gave me better results in the past, so I stuck with that strategy.

I follow the crisscross algorithm from the previous step and include the E in the medley. I usually use the same words over and over again for each case. Here is a table with those words:

They may change from time to time, but these tend to be the ones I use the most when I play Wordle. For example, if the U is not in the right place, I wouldn't use any of those options and go with something like MENUS, VENUE, GLUED, or REDUX.

If none of the vowels from AUDIO is in the hidden word, that most likely means that it contains two Es (there's a chance that it's only one E or a Y, but that will be a problem for attempt number three.)

In this case, there are only three options:

If the letter D was not in the word, I opt for a term like METER. If the letter D were in the word, it would depend on the color. If it were in yellow, I would go with a word like DEFER; and if it was in green, it might be the only time that I try to play with the Y using the word TEDDY (Y and double D? Risky.)

Before I started using AUDIO, my starting word was INPUT (weird, right? Maybe my Web Developer background?), and I solved the problem in 5—6 attempts. When I swapped to AUDIO, that changed to 3—4 attempts.

When I reach the third attempt, I usually have 2—3 letters within the word, and I have been able to discard 7—8 from the alphabet. However, considering that some of the remaining letters are "relatively uncommon," I may be working on my mind with a set of 8—10 letters of which I know at least 2 (and their positions or their non-positions), which reduces the number of possibilities considerably.

The word I pick for this step will depend on the path I used in the previous attempt and the result I got. There's no magic or anything mysterious to it. I go with the flow and pick a word that matches the specifications. Sometimes I win, and other times it leaves me close to the final word.

At this point, I usually have 3 or 4 confirmed letters, with at least two of them in green. The list of available words I'm considering has shrunk to a handful of them, and the game finishes here most of the time.

A common reason why I get to the fifth attempt is that the word has repeated letters or, more commonly, that it is a word that has many options with just one letter variation (e.g., LAGER, LATER, LAMER, LASER, and many other options with the format LA*ER.)

We are getting close to the finish line, and unless I'm 100% positive that I know the word, I will mess things up on purpose and go for a word that I know is incorrect to reduce my list of options.

Using the example of LA*ER, I could try LATER, but if it's not the word, I will still have 4+ other valid options —there are 11 for that combination, but some of them will already be discarded (like LADER)— and only one attempt left. What do I do? Mix up the letters from the variants and come up with a word that contains all or most of them. The word will be incorrect, but the chances of one of the letters being the missing one are high. In the case of LA*ER, I would go for something like GANTS or STAMP.

Generally, I have four letters clearly defined by the time I reach the sixth attempt, and I'm only missing one. The word is clear. I rarely get to this point, but it happens at times, as mentioned above when the word has many options with a single letter variation. But in those cases, I use the fifth attempt to find the missing letter. It's a close call, but it usually works (although I must admit there have been cases when it didn't.)

This method is not perfect (I never claimed it to be), but it works for me and my vocabulary. And I usually land on the solution within three or four attempts (if not, it goes to the sixth try.)

There are exceptions, of course. For example, this strategy struggles a little with words that have repeated consonants (something that happens more and more recently), and it doesn't account for the letter Y (used as a vowel, especially at the end of the word.)

Is there a pattern or method that you follow to play Wordle? What are some words that you commonly use? And what would you change from the strategy I follow? I am always up for learning.

I play a Wordle-styled game in two languages: English and Spanish, and many times I end up using the exact two words in both languages:

This combination happens relatively often when there are no correct letters in AUDIO. Then METER will typically yield 2—4 valid letters (either yellow or green.)

If you are part of "team-audio," you are in good company. For example, Bill Gates shared on LinkedIn that he enjoys playing Wordle every day, and if we pause at the right time in the video, we can see his first word: 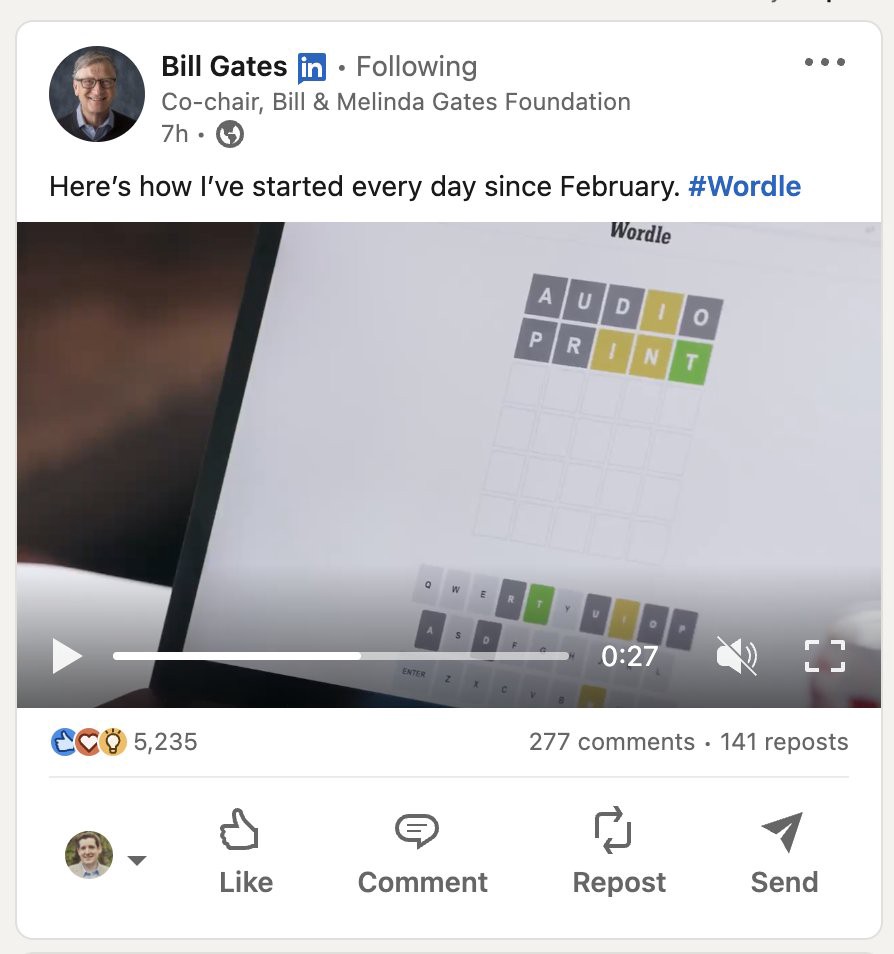 Interestingly, he went for PRINT as the second word. Following my strategy, I would have gone with something like LINES, NITES, or INFER. But, hey! PRINT had three hints (one in the correct place)... so maybe I should reconsider my strategy.